From defense to disruption, how companies are approaching sustainability in the food system, with Mary Shelman

How companies are approaching sustainability in the food system

When Mary Shelman, an internationally recognized thought leader and speaker, takes to the stage, there are many accolades and qualifications she could list to introduce herself. But she always starts like this:

“You’ll see that I live in Boston. You know, I was at Harvard Business school, but I’m from Kentucky. And not only Kentucky- my Dad was a farm equipment dealer there, and then when I was in middle school, he bought one farm and then a second farm.”

The generations before her -on both sides - were all from Kentucky.

“Always in agriculture, always too poor to own their own land,” she said.

That’s Mary Shelman’s way of saying yes, she understands global supply chains, as well as consumer and technology trends in agriculture - but she also knows what’s happening at an individual farm level, too. She understands the struggle and the opportunity.

And it’s Mary’s unique lens into agriculture that has made her so successful in tackling big challenges in the industry for governments and corporations all over the world - especially in the field of sustainability.

In 2010, Ireland was in a difficult economic position. Following the global financial crisis, many industries had collapsed. And though agriculture was still viable, it had always been limited in an export sense- because the country is an island, costs were always going to be high.

So Mary Shelman and another Harvard colleague came up with a strategy for the Irish agriculture industry.  This was her advice:

“You're going to have to brand your way out of this. You're too small, so you need to go to market with power and clear positioning because, by the way, the world is starting to say: we really want to know where our food comes from,” she said.

Their idea was basically to develop and promote the ‘clean and green’ image of Ireland, and use it as a brand positioning to sell Ireland’s beef and dairy to Europe.

The strategy went to the Irish food board, and two years later a program called Origin Green was introduced as a national sustainability program.

Mary says a critical element was to make sure it was data-driven.

“One of our pieces of advice to them as a country was, you can't just go out to build a brand; you have to have the data to back it up.”

“So what Origin Green is, is really a sophisticated system of collecting data. And that data begins on the farm and goes all the way through the supply chain.”

She said when they first brought the idea forward, they were told that it would never work.

However, nearly 10 years later, the program is still in operation and opening doors to other countries including Australia and the United States, with buyers realizing the data-backed sustainable product is something customers want.

Consumer demand for sustainability has only grown since Mary’s work in Ireland and so more recently she has been looking at how food and agriculture companies are responding.

Mary has found that there are a range of strategies. Some companies prefer financial incentives to nudge farmers to change behaviors, while others are looking to  disrupt the whole system, often empowered by new technologies.

Mary and Professor Damien McLoughlin of Smurfit Business School in Dublin have categorized the range of company responses into four groups-  defend, develop, defy and disrupt - based on levels of financial incentives and information exchange (including listening to what customers want). 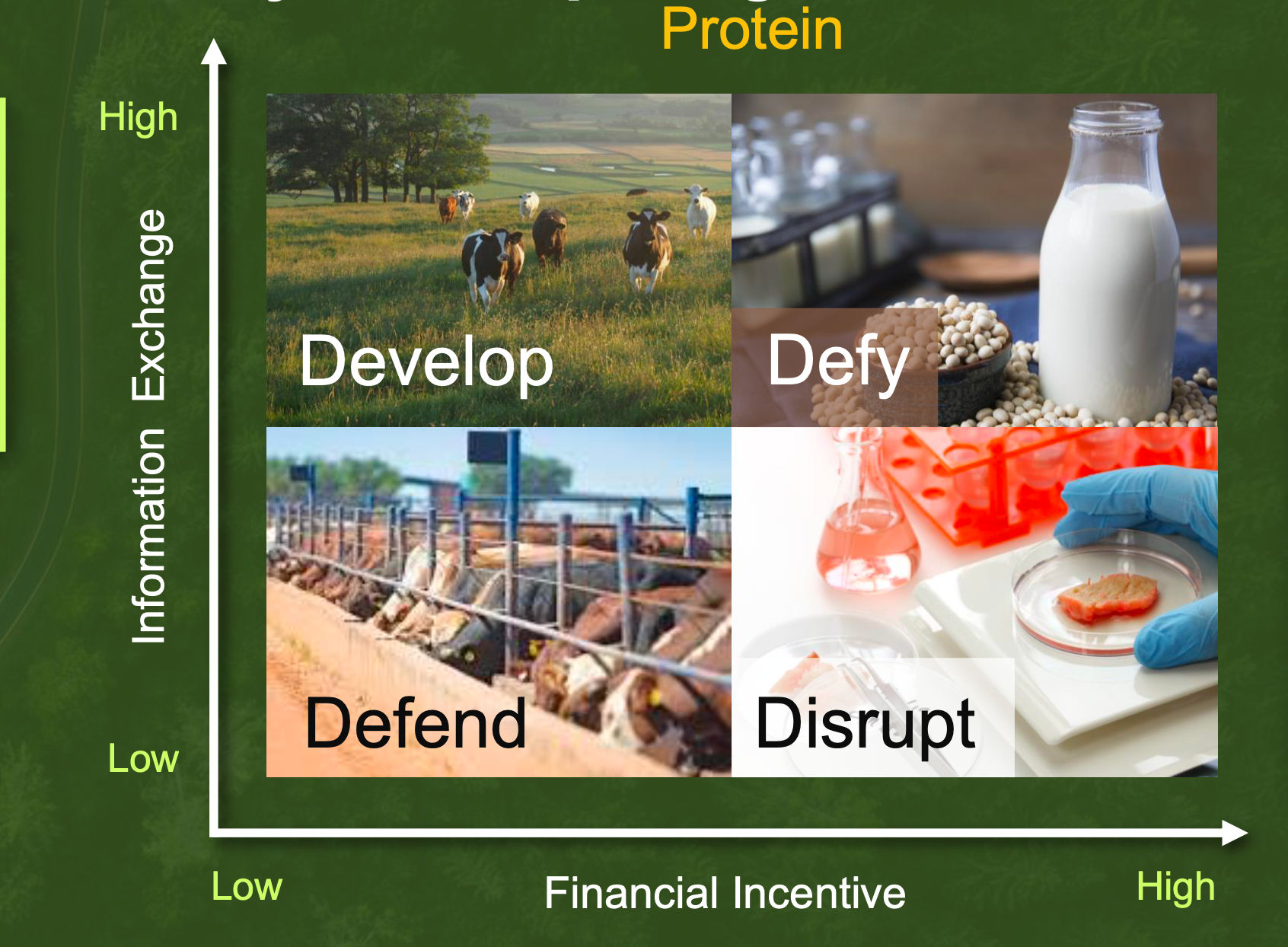 The “defend” box is about doubling down on productivity - it’s low on financial incentives, low on information and more aligned with the traditional food and agricultural system.”

“It’s not that they’re giving up on sustainability. It’s there. But it’s about increasing yields by using fewer resources,” she said.

The “develop” box still has low financial incentives, but high information exchange - which means the companies in this category are using sustainability audits and signalling mechanisms to understand what customers want.

“So I'd put Ireland's Origin Green up there in that box. I'd put Danone in that box,  in terms of what they're doing in being more responsive to consumer needs. They’re doing it through information more than through financial incentives to the farm,”  Mary Shelman said.

Then there’s the “defy” box, where there is high financial incentives and high information exchange. These are the companies questioning the ideas which underpin traditional agriculture. They are investor-backed and are challenging supply chains. Companies producing plant-based proteins are an example.

“So they're defying the idea that protein has to come from animals. They're saying, you know, there's a different source, a different supply chain,” Mary said.

Then, finally there’s the “disrupt” box - the companies with still high financial incentives from the investors, but basically no information exchange. They’re unapologetically looking to disrupt the market. Lab-grown or cellular meat is an example, along with fermentation based dairy companies, such as Perfect Day.

Mary Shelman created this framework, not to establish a right or wrong way of reaching sustainability, but rather to better understand the approach companies are taking to reach their goals.

While much of this activity is happening at the corporate level, Mary says it’s also important for farmers to understand that disruption in agriculture could happen.

“You need to keep your mind open that this big disruption could actually come, and think about what that could potentially mean for prices,” Mary said.

For agribusinesses looking to make a move in sustainability, Mary says your approach needs to be clearly in one camp.

“So, the middle is always the kiss of death. You need to either be really low cost or very highly differentiated,” she said.

“And this was the Irish story. - they couldn’t be low cost, so they had to be differentiated on something.”

“But you better be watching for the signpost out there that questions how sustainable are these industries going forward?”