So, why are the big food companies - like General Mills - supporting regenerative agriculture?

It can be risky for a multinational food company to sign up to what may be perceived as a ‘trendy’ movement - such as regenerative agriculture.

Commitments like this can attract accusations of ‘greenwashing,’ or making a token effort for a feel-good public relations boost. Equally, critics may complain that not enough is being done to advance the cause, or even that the company is corporatizing a grassroots movement.

General Mills, the company behind brands such as Yoplait, Betty Crocker and Cheerios, to name just a few, has recently announced a commitment to bring regenerative agriculture practices to one million acres of farmland in North America by 2030. This is not insignificant- it represents 20% of the farmland General Mills sources from in the region.

For those skeptical of their motives, General Mills’ position is that it’s good business to help the farmers it sources from to become more sustainable and efficient in the face of increasingly extreme droughts and floods.

Other large companies are making similar moves -  most recently in July 2020, Bayer announced a carbon credits program for farmers in the U.S and Brazil who adopt “climate-smart” practices such as no-till farming and the use of cover crops.

But, General Mills is more than comfortable with the term, despite the occasional controversy it sparks.

Jay Watson, Sustainability Engagement Manager at General Mills, said they have taken this direction, and grounded their efforts in science, to reduce risk for themselves and their suppliers.

“To those critics, I would just ask them to share what their definition of regenerative agriculture is, because I think it varies,” he said.

“And ours is focused on outcomes - and you can’t really have an outcomes focused approach if you’re not measuring outcomes with the best available science’. 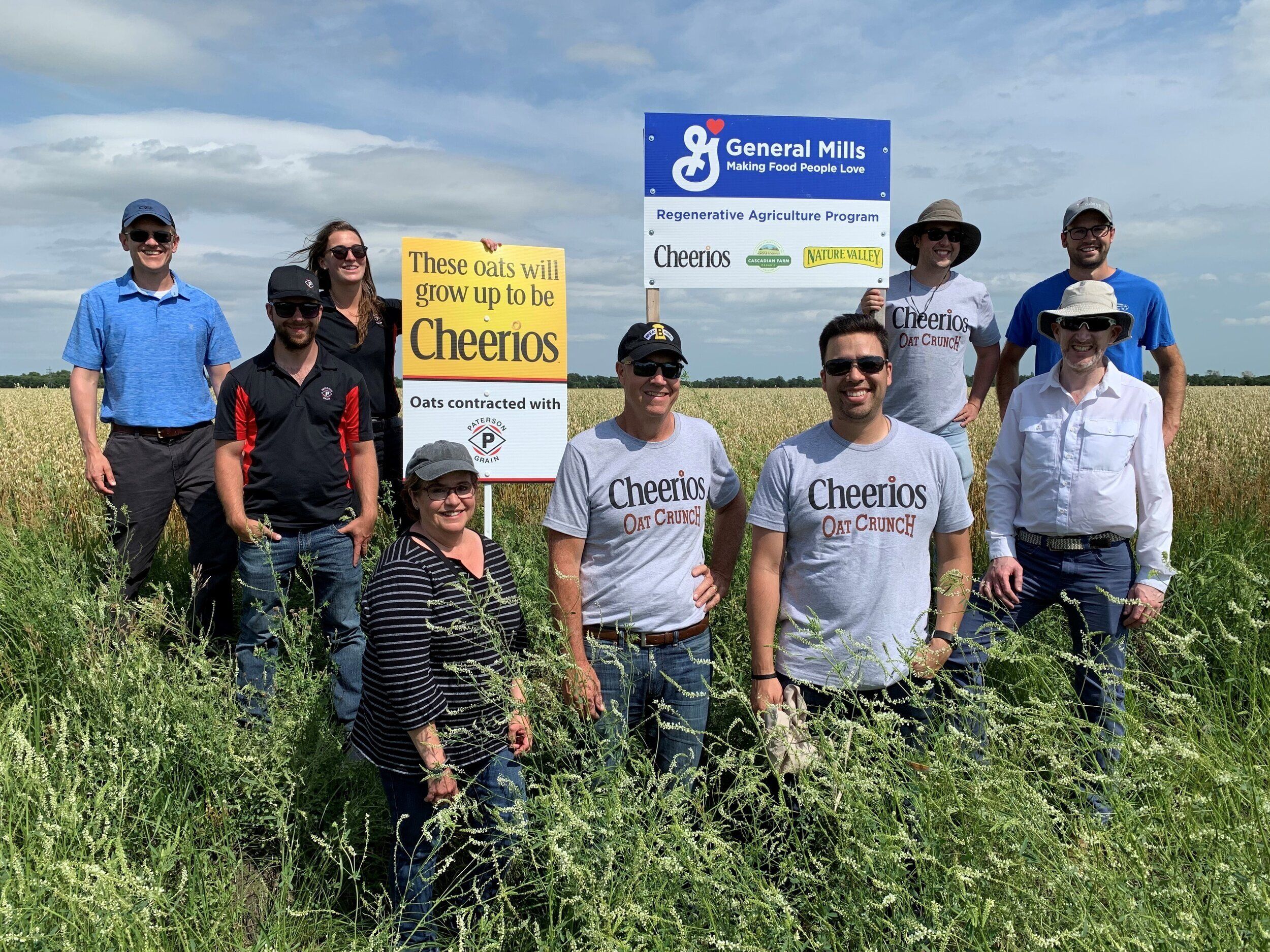 A track record of sustainability commitments

If you ask General Mills about their sustainability track-record, they’ll say it dates back to the 1930s when suppliers for the company’s Green Giant brand became early adopters of crop rotation practices.

In more recent times, General Mills has made several bold, public sustainability commitments. They started by investigating the risks associated with climate change, including disruptions to supply chains and specific commodities (e.g., cocoa in West Africa and almonds in California), for example due to extreme weather events.

Another significant risk General Mills identified was one of reputation: would their brands and share price suffer if they failed to address the greenhouse gas emissions in their supply chain?

And a year before that, General Mills set out to sustainably source 100% of its 10 highest priority ingredients, including wheat, palm oil, corn and milk, by 2020.

Today, now that they’re 91% of the way to their 2020 goal, General Mills is focused on regenerative agriculture.

“I  think we have a history of making bold commitments and being very open about not knowing how to get there,” Jay Watson said.

“A commitment with a long enough runway gives us time to be able to figure some of those things out,” he said. 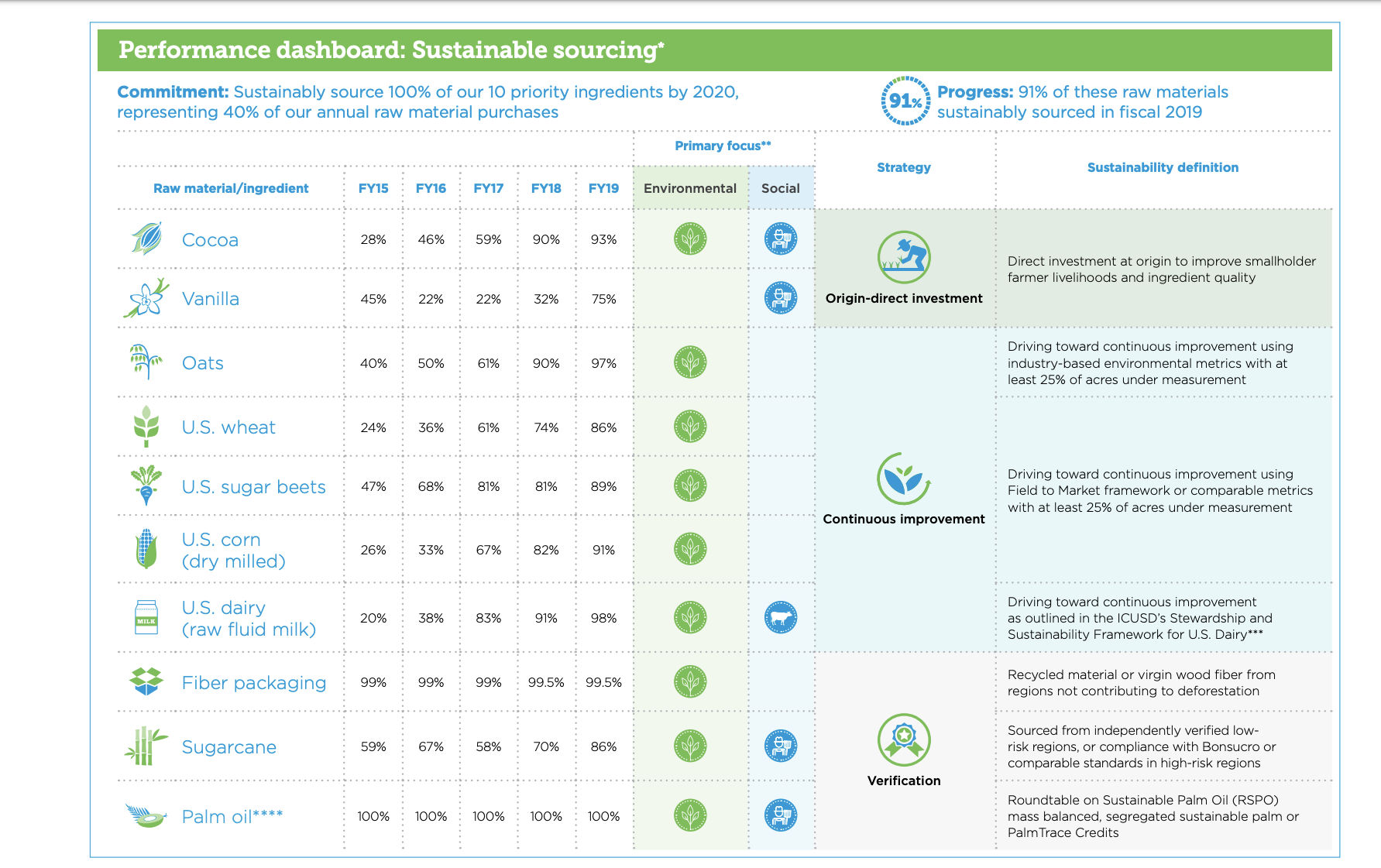 General Mills defines it for each crop, tracking investments made directly at the origin to benefit farmers. They also track engagements with producers that help them reduce their environmental impacts.

But, part of the challenge for General Mills is that 90 percent of the greenhouse gas emissions associated with its value chain occur in entities not owned or controlled by the company.

Essentially, emissions and water use occur upstream of its direct operations - in agriculture, ingredients and packaging. Therefore, there’s no silver bullet solution that can be applied across the board.

How General Mills is measuring its regeneration efforts

There’s no silver bullet for measuring regenerative agriculture, either. But for General Mills, soil is the place to start.

There’s also a self assessment tool that General Mills has created to help farmers understand how their practices align with the recognized principles of regen ag.

“In some of the pilots that we've announced publicly, it's more around supporting producers and the evolution in their approach and mindset”, Jay Watson said.

“But regenerative ag is a tough thing to understand for many,” he said.

“And we have an opportunity to help people understand general farming practices and how the system works... let alone a very different way of thinking about the farm as an ecosystem and being able to produce food while restoring the function of that ecosystem at the same time.”

General Mills’ most recent pilot project was announced in June 2020 - a three year regenerative dairy program in western Michigan, a key source for its fluid milk supply. The company has partnered with consultants Understanding Ag and dairy cooperative Foremost Farms to implement a holistic approach to managing land, cows and manure.

The other regenerative agriculture programs include a pilot for oat growers in North Dakota, Saskatchewan and Manitoba and a seperate one for wheat growers in central Kansas.

“They are pilots because we're learning a lot,” Jay Watson said.

“A  big part of that is just learning from producers about what's working and what's not. And so we're making sure to remind leaders internally at General Mills, that this is something we're piloting and we're going to need to be flexible and agile,” he said.

“But it's the right thing to do. And producers need support right now.

And as a food company, we have a unique role to play where we can connect consumer to producer.”

Jay said measuring how the soil changes over time is also a key part of the program - including analyzing carbon levels, organic matter, microbial activity or water infiltration, as appropriate for that farm and geography.

“Because if we’re going to say ‘regenerative ag’, we need to be able to point to something getting better or restoring or being rebuilt,” he said.

“Let’s say we baseline soil carbon and then come back in five years and see how it changed. We need to understand what happened on that field.”

That said, General Mills is still taking a whole ecosystem approach, instead of focusing on just one variable, which can be difficult in complex natural systems.

He admits, scientifically and logistically, this might be hard for some “to stomach”.

“They’re living systems that are connected. And so we need to study the whole system,” Mr Watson said.

“If we have a change in an outcome, say soil health, we’re not going to be able to point to the one thing that drove that, because it’s not one thing, it’s a systems approach to managing the operation,” he said.

The future role of agtech

General Mills is working with several tech and research groups to measure soil health and record the data.

The includes involvement in the Global Landscapes Initiative, which is developing techniques to combine satellite and ground based information on land to build new datasets of croplands and pastures. It’s hoped this will lead to new insights on productivity, practices, and land degradation around the world.

General Mills has also joined a multi-stakeholder group called Field to Market, which has as a benchmarking tool for sustainability performance called Fieldprint.

Jay Watson admits many of these technologies are emerging and not currently cost effective at scale.

But, he thinks it’s wise for the company to invest in it now, because the tech is likely to advance significantly in the next few years.

“Remote sensing, such as using satellite imagery, to detect no till and cover crops in a broad swathe of acres for a whole region… and if you add a soil carbon model to that, you can estimate soil carbon change.”

He said there’s also a role for infrared technology and cameras to measure insect biodiversity.

But, according to Jay Watson it’s not ultimately about the technology.

“I would say, tactfully, that some of the best tech is in nature and in farmers’ minds and their approach,” he said.

“If we can just tweak the mindset to help producers see that if they’re farming in concert with nature and take some of nature’s principles...  that’s going to out-compete some of the agtech that’s out there, and in a lot of cases be more profitable too.”

This article and podcast was the third in our #Regen Ag series for Agtech...So What? If you like what you read, share it! You can also listen to our earlier episodes: