The chasm between those who champion regenerative agriculture and those who don’t has never seemed wider.

For some farmers it has revolutionized their entire farming ethos, giving them a way to better manage their land. But others are deeply skeptical and indeed even fearful that their farming peers are going to go on a ‘regen journey’  to nowhere… or worse, to bankruptcy.

The reason it causes such division is because regenerative farming is not a set of practices with a definitive measurement or metrics system. It’s actually a mindset.

And when you start to question the very foundations that underpin someone’s daily activities… it’s not always well received.

Tasmanian farmer Will Bignell, who measures soil carbon levels and is an avid adopter of new technologies, claims he’s essentially a conventional farmer, making most of his profits through producing lamb and crops for the commodity market.

He doesn’t like the term regenerative agriculture - because it has a negative connotation to it.

“My family has, for 200 years, been farming in the same patch of dirt. I irrigate, I use fertilizer, I drive tractors  and I'm making money. I’m happy  and I think my landscape looks good,” he said.

Will Bignell made his observations at a recent Agtech Meetup debate organized by AgThentic, Sprout X and Platfarm.

On the opposite end of the regen spectrum sits Toby Grogan, a natural capital specialist for Impact Ag, a firm which uses the practices of regenerative agriculture to help its clients improve land health and productivity.

He says regen ag is really about changing entire ecosystems over time.

Just as Will has a problem with the term “regenerative” - Toby Grogan doesn’t like some of the rhetoric describing regen ag as the latest trend or buzz word. 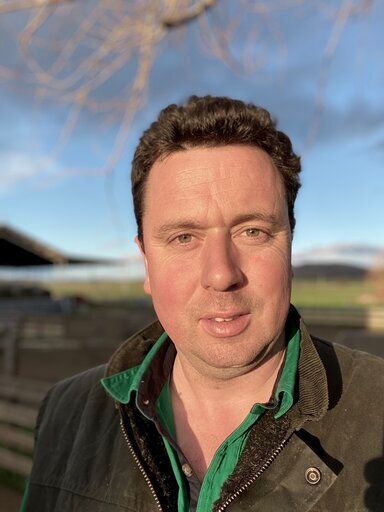 “We're not a business that has just appeared last week and decided we're regen and are going to save the world,“ he said.

“We're a business that is built on a decade of data that demonstrates that with lower inputs, certainly not no inputs, but lower inputs and with management change… we can increase productivity, and increase return .”

Toby Grogan points to an example of the work Impact Ag did with Maia Grazing for the Wilmot Cattle Company in Northern NSW.

He said that from 2010 to 2016 the farm saw an increase in its soil organic carbon levels and overall health through grazing management, as well as higher productivity.

Over four years, they measured a doubling of grass yield. “Or an increase of 220 kilos per hectare, per a hundred millmetres of rain. So that, to me, sounds like good business,” Toby said.

However, Will Bignell argues that’s not regen ag so much as it is simply good farm management.

He worries that farmers are going to blindly follow the promises of regen ag, such as not using any fertilizers or other inputs, at the expense of their business.

“It puts the fear of God in me that I'm watching people get really good at grazing, grow a heap more feed. They can up their stocking rate because they’ve just learned to graze. But then you turn around and say, no, you don't need to put on phosphate, well I can tell you now what happens after 15 years of drought and dry spells and diversification, you can't grow anything.”

Is there a safe way to trial regenerative agriculture?

Going back to this concept of the “regen ag mindset”, it seems some farmers fear that if they start the regen ‘journey’ ... there will be no coming back.

Is it possible to reach a happy medium of being open to some of the claims of regenerative agriculture, while remaining skeptical and watchful enough to pull back if something isn’t working?

South Australian wine grower, Richard Leask (pictured in the title image), believes so. He has been testing out some regen ideas, such as introducing livestock grazing in his vineyards.

He also just completed a Nuffield scholarship where he travelled the world, looking at whether regenerative agriculture could be applied to wine production.

“I’ve already got challenges around resistance to herbicide, so that's not a feasible thing going forward,” he said.

“If you don't have a plan B for that, then you're going backwards. And we know that cultivation isn't the answer, right? Because it's costly, every time you do it, it's costing you money.”

Richard argues there are key tenets of regenerative agriculture that most farmers would agree with - such as more plants, better diversity and more ground cover.

“So rather than get too worried about who’s regen and who’s not, let’s focus on the things we know work.” he said.

For Richard, it’s all about coming back to your own farming system and working out what your key goal is.

“Now for me it was to improve my water holding capacity or at least plant available water and reduce my costs. And how do I do that? I look at some of these processes and do it.”

And perhaps this is the key mindset we need to be in. Not gambling the family farm on an idealistic view, but rather, asking yourself, is there a better way of doing things?

“If we don't give it a go, then we're not going to know. And that's where my mindset sits,”  Richard said.

“Don’t do 4,000 acres off the top of your bat, but have a little bit in the corner where you are prepared to make a loss or, or have a failure on,  and it isn't going to break you, but you might actually learn something, “ he said.

“Because if we don't try something new, we're just going to be on the mouse wheel for however long we're on it … until it falls off the hinges.”

Enjoyed this article? Please like and share it! Listen to more from Will Bignell, Richard Leask and Toby Grogan in the podcast episode.

Useful Links from this episode:

This is the 4th episode in our Regen Ag series, and you can go back and listen to the earlier episodes here: