Balancing Evidence and Emotion for the Future of Ag: Insights from the 2018 Australian Farm…

Last week, Australia’s capital city, Canberra, hosted a series of ag-related events, including the AgriFutures Rural Women’s Awards Gala, the National Farmers Federation National Congress, and the Australian Farm Institute Roundtable. I wasn’t able to make the Gala, but was fortunate enough to speak at the NFF Congress and attend the AFI Roundtable. 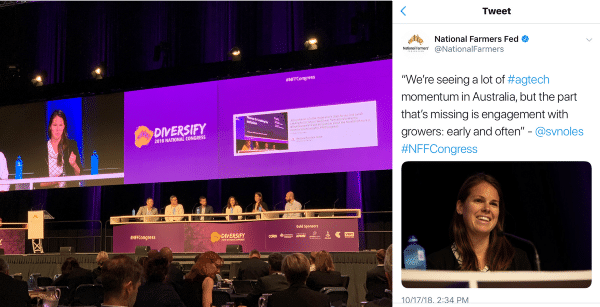 The theme for the Roundtable was Evidence Meets Emotion. This was particularly relevant given recent media and community focus on Glyphosate and Live Export discussions earlier this year. More broadly, the tension between evidence and emotion is a global issue for agriculture. The 2018 Global Agricultural Productivity (GAP) Report: Agriculture for a Healthy Sustainable World, for example, focuses on how today’s consumers expect much more from their agriculture and food systems than in previous generations. How do consumers get this information? Are they making decisions based on evidence or emotion?

As always, the team at AFI brought together a diverse group of speakers, including animal activists, academics, farmers, policymakers, and researchers for what was an engaging and informative event. Here are a few of my takeaways.

One of the highlights for me was 7th generation Farmer and Nuffield Scholar, Rob Egerton-Warburton. Rob explained that though WA is almost entirely an export economy (“None of you in this room will have ever eaten anything I produce”), Australian sentiments and policies govern how he farms. This is a challenge, Rob explained (and has written about), because consumers (and perhaps policy makers) don’t fully consider the consequences of their decisions. For example, consumers want to remove glyphosate, GMOs, and antibiotics from their food, but they are not always aware of what the food system would look like without these products. Would it really be more sustainable? Would food cost more?

In contrast, farmers live with the consequences of these decisions every day. They know what will happen to their animals and crops if they are limited in the tools they can use to grow them.

Thinking about consequences applies globally given the nature of today’s supply chains. And for Australia, especially, given 70% of agricultural production is exported (projected to be worth $47B in 2018–19). The challenge is that, all too often, the people making the decisions don’t consider how their decisions, if based on emotion rather than evidence, will impact the farmers responsible for implementing them.

Effectively combining evidence and emotion is necessary, and costly

The key question of the conference was, “which drives decisions, evidence or emotion”? Not surprisingly, the answer is both. What was surprising, though, was learning just how much our emotions govern our decision making. Keynote speaker and writer Bernie Hobbs explained how our biases can hijack our logic and prevent us from making evidence-based decisions. A classic example is confirmation bias: we tend to seek out, and believe, data that confirm our existing beliefs while scrutinizing (if not outright rejecting) data that lead to conclusions we disagree with.

So for people and companies seeking to communicate about tough issues in agriculture to stakeholders outside the industry, what tools are available to overcome biases? Bernie presented several options (e.g., inoculation theory and relationship building), but the challenge is that they all take time and money to do well.

Building and disseminating compelling narratives to convey evidence on critical issues is not easy. It requires new skill sets, such as storytelling and effective use of digital marketing and social media. But how do we upskill communicators in the agriculture industry on these methods? And, as importantly, who pays?

For producers who are looking to provide much-desired transparency to consumers, there may be a win-win solution: adopting technologies or practices that have a commercial benefit, and then using the data/compliance as a secondary benefit. Though not related to data specifically, Egerton-Warburton again has a great example with the premium he gets for non-mulesed sheep. He adopted the practice both because it delivers a commercial outcome and because it aligns with consumer sentiments. The latter alone might not be enough.

Ag cannot be above listening to consumers

It seems that consumers in agriculture care more about the supply chain than in any other industry. This is sometimes seen as a negative: producers fear the scrutiny that comes with consumer desires to have more information. The media often makes this worse, sharing stories about questionable farming practices to consumers who have no way of knowing that the farmers using them are in the minority.

But today’s consumers’ desire to engage with agriculture, and to learn more, is actually SUCH a positive.

John Ralph Essay Competition winner and Roundtable speaker, Deanna Lush, shared an example of how executives in other industries can be seen in call centres listening to customer complaints so that they have the pulse of what’s going on, and can gain insights to inform strategic decisions.

The idea that in agriculture we just want consumers to trust us and leave us alone is ludicrous. How can we know what they want, if we don’t have a dialog?

Ross Hampton from the Australian Forest Products Association (AFPA) shared an example of how they are using stakeholder engagement to their advantage. They did a survey and found that while only about 30% of people are ok with cutting down trees at all, over 70% are ok with cutting down trees “as long as they are replanted”. So, AFPA focussed their communications efforts on sharing the work they were already doing to replant forests. Again, they were already doing this as it’s good business practice, but now they are also talking about it, and maintaining social licence as a result.

Is ag ready for what transparency means?

I found it surprising that there was not much talk about technology at the Roundtable, despite the fact that it’s rapidly accelerating and being implemented in agriculture. And these new technologies are changing the meaning of transparency. We’re seeing this already with activists campaigns that capture drone footage of production and slaughter facilities. We are also seeing the impact of technology with the development of cameras and sensors that can capture production and compliance data, helping producers give transparency to consumers and regulators.

Soon enough we will have centimeter-level resolution satellite imagery of the whole planet. When this happens, what will transparency mean? At the conference, advice from Temple Grandin- bring ten people from the city to the farm, and if they’re happy, you’re doing a good job- was referenced as the metric for transparency. But will this hold up in the technology-enabled future?

The truth is that no industries will avoid scrutiny. Are we ready for what that means? If we continue to be reactive, rather than proactive, we surely won’t be.

As Deanna Lush says in the conclusion of her award-winning essay, “The industry has spent enough time being caught flat-footed and defending the indefensible. It is time to look at a new approach and a new way of engaging. The sooner we recognise that society is already deciding the right to farm and choose to be part of that conversation, having influence where we can, the better.” 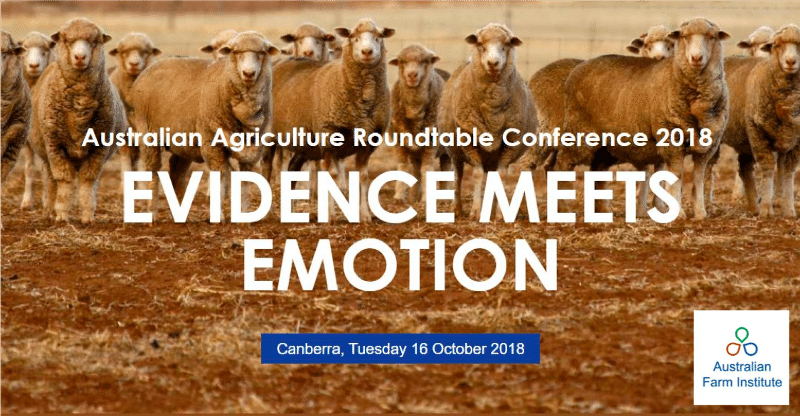