Clams and Lambs: possible impacts of a 20% drop in global demand for beef & dairy

Imagine it’s December 2023. You’re looking back on the year, and wow was it a crazy one for agriculture! It all started back in February when MCT (“mad cow disease two”) hit beef and dairy, sending shockwaves of concern through agricultural value chains. Though herds globally were susceptible, penetration rates remained in the very low single digits and containment happened rapidly, with unparalleled public-private sector coordination of biosecurity responses. After an intense few months, it seemed impacts were managed. The industry started to feel they could breathe a big sigh of relief.

Or so we thought! What was happening in parallel, outside of meat industry circles, were two reinforcing loops of viral misinformation. Driven by animal rights activists and health-focused bloggers, and fueled by digitally-native propaganda efforts across social media platforms, the interwebs lit up with inflammatory content. The result? Global demand for beef and dairy products fell by 20%.

Why a “shock” scenario?

Earlier this month, we convened a small group of agribusiness and investing experts in Boston, including venture and growth equity investment, philanthropy, supply chain, agriculture commodity merchandising, and farmland asset management representation. We then presented the above scenario and asked: what would happen next?

Now, if you’re thinking that our “shock scenario” sounds unnecessarily provocative or even ridiculous, well, yes, that was the point! Our intention was not to predict the future; in fact, all the data we’ve seen points to a growth in demand for all types of protein, including animal products. Instead, we created a “shock scenario” to help the group break out of our comfort zones, creating space to identify unexpected opportunities, gaps in our thinking, and actions we might take today to future-proof our organizations for whatever scenarios lie ahead.

After hundreds of post-its and some heated debate, we came up with several possible — though not mutually consistent — narratives outlining the first, second, and third-order impacts of a 20% drop in demand for beef and dairy on people, value chains, and ecosystems. 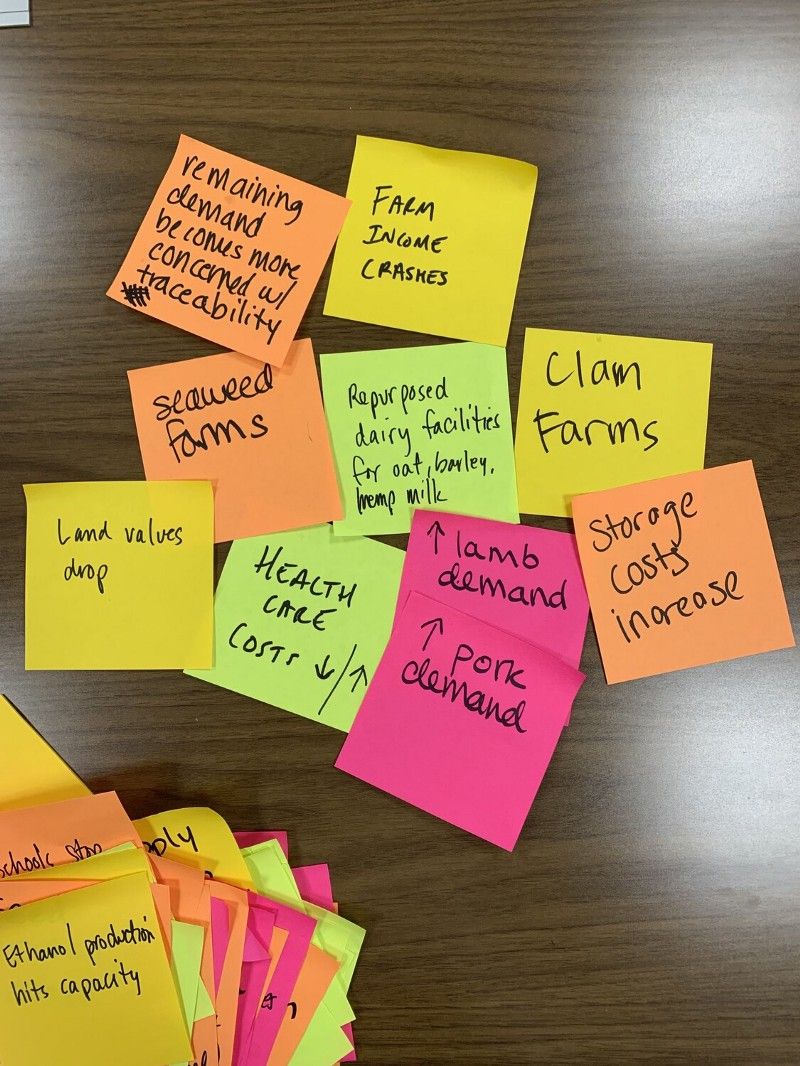 Narrative 1: A tail of two beefs

This future looked at what kind of beef people would still be eating to make up the remaining 80% of demand, and whether it would be different from what we eat today. We imagined two prevailing — and very different- types.

First, the established commodity system, characterized by high CAPEX, scale, and industrialization, would fight hard to keep their economics viable. We’d see investment in activities such as vaccines, lobbying, and significant digitization as transparency becomes table stakes. For producers, the costs to meet the wave of new biosecurity requirements would be overwhelming, leading to increased consolidation and “hollowing out” of the middle as organizations without scale struggle to survive.

This future simultaneously sees beef purchases flowing through shorter supply chains where consumers have a direct connection with producers. Infrastructure would need to evolve to help these supply chains mature without compromising the trust that underpins them. Examples could include on-farm processing, regional buying and ownership models, and even heirloom genetics.

This future also has implications for the plant-based protein industry, which would face pressures both to commoditize and, simultaneously, to diversify. The current market is largely characterized by direct-to-consumer and retail plays, so brands, value chains, and the investment landscape would need to evolve to meet new institutional-scale demands (e.g., schools) and unlock at-scale servicing of foodservice channels. At the smaller end of town, pressure for non-soy-derived alternatives would drive investment into new products and value chains as health-conscious (and likely, wealthy) consumers feed off the misinformation media frenzy.

Key takeaway: The fight for the status quo would be brutal, and trends we’re already seeing today at both the commodity and small scale ends of the protein industries would accelerate.

This narrative focused on what happens to the cropping systems and the land on which they exist, largely in North America. While it might seem that a shock to beef and dairy demand would fundamentally shift the row crop system, we in fact struggled to envision a world where the future looks drastically different today based on just a 20% shock. The system is incredibly well insulated, and in most cases, we landed on a future where land values for high-yield corn and soy acres don’t change significantly. Soy will continue to go to pigs, for which demand will grow as diets shift away from beef. And corn supply will be largely absorbed by energy markets, underpinned by a policy system that won’t let the status quo fail.

Though most of the system looks a lot like it does today, one area that might require innovation would be finding markets for ethanol and biodiesel by- and co-products, which would increase as more corn floods the system, yet would not find demand in livestock feed markets. Opportunities for other adaptations needed to cope with increased utilization could also arise.

Another change we’d expect to see in this future is a shift in land use for marginal land. Here, the highest and best use (HBU) might actually shift from cow/calf operations toward the provision of ecosystem services (e.g., carbon, water, biodiversity, etc.). As one participant summarized, “no matter how expensive carbon is, it’s not likely to move the needle on $14k corn country. On $1k an acre land, though, we’ll start to see changes”.

And this is where the lambs come in! Not only would this future see the uptake of soil health building (and carbon sequestering) practices such as cover cropping and no-till, it would also see whole new systems emerge, such as agrivoltaics. This in turn will require more research and create opportunities for holistic, tech-enabled management systems. It will also lead to new wool and lamb infrastructure and have impacts on global supply chains and prices for these commodities.

This future also has opportunities for geographies that already have strong legume infrastructure, such as the Northern plains. As demand for alternative proteins increases, we may see more soy in rotations, different rotations, and even experimentation with other previously unviable grains (e.g., kernza). Opportunities to create the required changes in infrastructure to match supply and demand would arise.

Key takeaway: some areas of North American agriculture will see big shifts in what is, and isn’t, viable to farm, with implications arising for communities, investors, and consumers.

Zooming in on the human health impacts of a shock to beef and dairy demand was perhaps the hardest area of all to explore given how much is left to learn about the relationships between food production and nutrition. We made headway by envisioning a (perhaps overly simplified) future in which only “better for you” meat & dairy remains, but these products become more expensive. 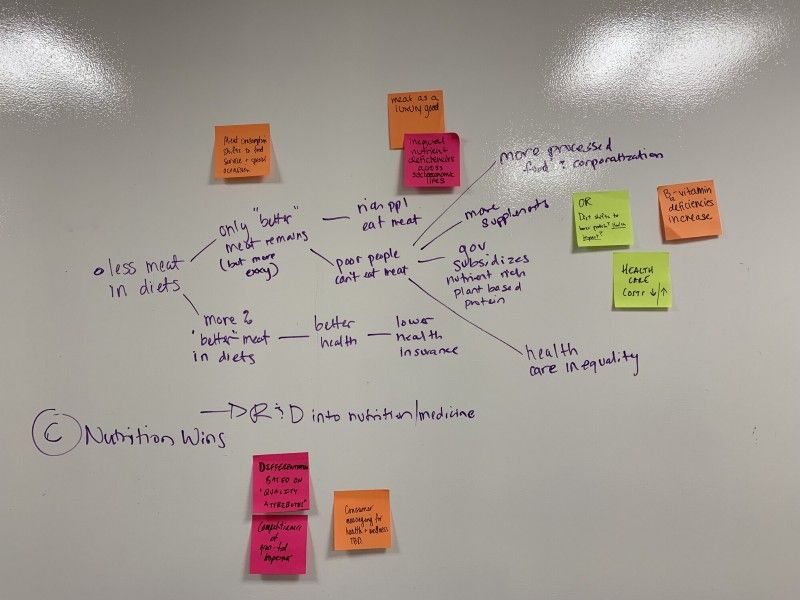 As some populations struggle to afford beef and dairy, their diets would increasingly lack certain nutrients (e.g., vitamin B12). To curb rising inequality, and the impacts to health care costs and society, governments would step in to subsidize other forms of protein from a nutrition perspective, perhaps investing in research efforts related to certain nutrients and functional ingredients.

For brands and retailers, opportunities would arise to position products as nutritionally superior, and the need for measurement infrastructure to underpin these claims would drive change along value chains. Investment in personalized nutrition, a trend we’re already seeing today, would also accelerate.

Meanwhile, demand for affordable sources of animal-based nutrients would increase. These could include both traditional species, such as turkey, as well as formerly niche species, such as clams- apparently, a great source of B12! Opportunities would arise to scale new value chains, products, and eating experiences. Cape Cod Clam Farms, here we come! :)

Key takeaway: there’s a lot we don’t know about nutrition, yet it’s a strong driver for consumer decision-making. As science and technology continue to advance rapidly, this is a space to watch!

When we first envisioned this scenario, we expected it would fundamentally change row crop agriculture. Instead, the group struggled to imagine a future for corn and soy that’s very different from today- the path dependence is just too strong. In fact, it wasn’t until a 50% drop in demand was momentarily envisioned that we were able to conceive of drivers for fundamental shifts. This was a big learning- the importance of the US Farm Bill and biofuel markets (corn ethanol and soy diesel) cannot be understated, and for anyone looking to make investments in agriculture or agtech, they must be understood.

We were also surprised by how much agreement there was around the table. By design, we filled the room with perspectives ranging from “big ag” commodity trading to “regen ag” investing to “alt meat” advocates to stimulate discussions. While the conversation was heated at times, we landed on similar conclusions about the need for more investment in measurement infrastructure for nutrition, the viability (in certain cases) of ecosystem services markets, and the challenges that lie ahead for getting plant-based proteins to cost-parity with commodity livestock products.

The ultimate takeaway for most may have in fact been going through the exercise itself with the unconventional mix of perspectives in the room. As one participant said, “too much incremental thinking is dangerous- it’s so valuable to engage in discussions where it’s not an echo chamber, and in agriculture, we need more people who disagree so we can unlock solutions to new viable futures”.

This post was co-authored by Sarah Nolet (Agthentic) and Renée Vassilos (The Nature Conservancy, TNC). To get regular podcasts, research & insights on all things agrifood innovation, subscribe to the “agtech so what” newsletter. To learn more about TNC’s work in the agriculture innovation space, check out their most recent blog: Building Soil Health through Innovation.

Addendum- just how ridiculous was the scenario we crafted?

As mentioned above, we intended it to be “out there.” However, it may not be as far-fetched as one might think! Here are two news stories that caught our attention recently:

We were not intending to be “right,” nor comprehensive, in what we explored or what we’ve summarized here. We hope this post inspired you to think differently about the future- if you did, please share your insights with us!