From Digital Disruption to Digital Farmers: How Australia Built an AgTech Ecosystem in 2 Years

Two years ago I wrote about Australia’s opportunity to become a global leader in agtech. I’ll admit that at the time I was skeptical, and the piece was a bit more aspirational than confident.

That same month, I went to the Australian Farm Institute’s (AFI) Digital Disruption conference. Though I tried to be hopeful, my five takeaways were largely on barriers: reasons why agtech adoption is low, commercialization is hard, and significant institutional and infrastructural barriers exist for innovation in agriculture. At the time, I was new to Australia and, perhaps because I saw a lack of the familiar innovation resources I was used to in Silicon Valley and Boston, I assumed that the road to a vibrant agtech ecosystem in Australia would be long, uphill, and maybe even never-ending.

Yes, challenges remain. And no, we’re not churning out billion dollar companies (yet). But in about two years, we’ve built an agtech ecosystem. Australia has truly established itself as a competitive player in the global agtech revolution.

The penny dropped at this year’s AFI conference, Digital Farmers. Here’s why.

In about two years, we’ve built an agtech ecosystem and Australia has truly established itself as a competitive player in the global agtech revolution.

Setting a vision for the future

It’s well known in leadership training and MBA courses: you need buy-in for a big vision to achieve big things. KPMG’s Powering Growth report and the findings of the Precision to Decision (P2D) project started this process by setting an ambitious goal to become the next $100B industry, and outlining a clear path to over $20B in productivity gains from digital technologies alone.

But agtech is not the same industry as agriculture. It is complementary to, but separate from, production agriculture. And therefore the potential value- the size and opportunity for Australia- is much bigger than $100B.

In his opening keynote, veteran agtech entrepreneur Matthew Pryor challenged the audience to think about agriculture as a knowledge economy rather than a produce economy. What if we can leverage Australia’s know-how, and capitalize on hard-earned, deep expertise in research and grassroots, on-farm innovatio? “Our opportunity to participate in that economy is limited only by our ambition. The size of that opportunity is many hundreds of billions — likely more.”

This vision for the future is extremely ambitious, but also inclusive, practical, grounded in established areas of strength for Australia, and most importantly, inspiring.

Getting all the voices in the room

There are too many agtech conferences where the key stakeholder- the farmer- is noticeably absent. That was not true this week. The first panel of the event was full of farmers, and there were plenty of farmers in the audience as well. And more than farmers, we also had agribusinesses, researchers, government, entrepreneurs, students, and agvocates in the room.

Bringing all these voices together changes the conversation. Rather than preaching to the choir, panelists were challenged to back up their claims and engage in productive conversations on key issues:

Creating an opportunity to respectfully discuss- and challenge- these important issues with people who have different perspectives is critical to building a vibrant ecosystem, and the first step in moving from talk to action.

Issues like connectivity, the rural/urban divide, poor commercialization outcomes, and the macro pressures impacting our food and fibre supply chains get plenty of airtime at agriculture and agtech conferences. So it was incredibly refreshing to move beyond these oft-discussed issues to some tough, meaningful conversations championed by brave, committed panelists and participants. A few examples include IP ownership (it’s worthless if it’s still sitting on a shelf), gender diversity in ag, how China is way ahead of Australia and “clean and green” is just a myth, and state-level focus on “owning” a space, rather than working together to grow the pie.

We also heard from Georgie Somerset, Deputy Chair of AgForce Queensland, who gave an overview of all the technologies that have helped her be more productive. No, not virtual fencing or the IoT. Think Office 365 to coordinate emails and share documents between her family and colleagues. Zoom to attend board meetings virtually, saving 64 days of travel each year. And WhatsApp and Facebook to create communities of like-minded individuals, like Rural Business Collective. These are simple technologies that don’t seem at all revolutionary, but they are not well adopted in many regional and remote communities, and they have huge potential productivity (and enjoyment) benefits. Takeaway: stop using distance as an excuse not to get involved.

Professor Susan Brumby, Director of the National Centre for Farmer Health, also covered on an important issue that does not get enough airtime: mental health. Regional communities, and especially farmers, are more likely to suffer from depression, alcoholism, and just general health issues that go untreated because the doctor is too far away, or it’s too hard to ask for help. Technology is helping to solve these issues, too, through telemedicine, online tools and communities, and regular newsletters to raise awareness and reduce stigmas. Takeaway: technology is about well-being and communities as much as productivity

These three examples- creating a shared vision, including diverse perspectives, and engaging in dialog rather than shying away from tough issues- are just a few of the many things Australia has done to build an agtech ecosystem in the last two years. And I can guarantee, based on the energy in the room alone, that we’re not done yet. Australia is set to build on a competitive advantage in agriculture, and become a global leader in agtech. 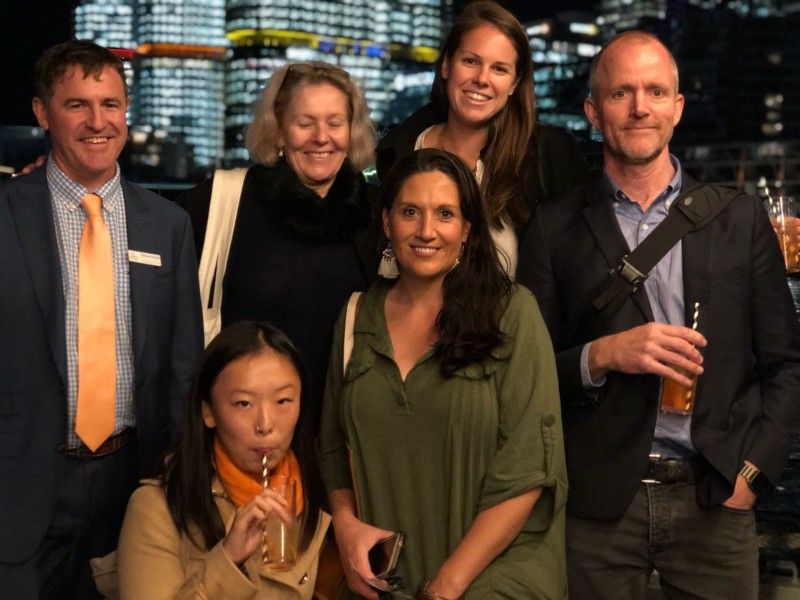