The challenges & opportunities for biologicals in ag

Farmers are under pressure- from regulators, consumers, and rising input costs- to shift toward lower chemical intensity production, and “biologicals” are touted as one possible solution. In fact, buoyed by claimed benefits such as increasing soil health, sequestering carbon, and managing and mitigating abiotic stress, the global agricultural biologicals market is expected to grow from $8.5B in 2020 to nearly $27B by 2028.

But despite the potential, biologicals also have a reputation for being ‘snake oil,’ with companies making claims that seem too good to be true, or that don’t stack up outside the lab.

We caught up with Jarrett Chambers, founder and President of ATP Nutrition, and Shane Thomas, founder of Upstream Ag Insights, to discuss what biologicals are, how we can know they work, and what business models can help bring them to market.

What is a biological? 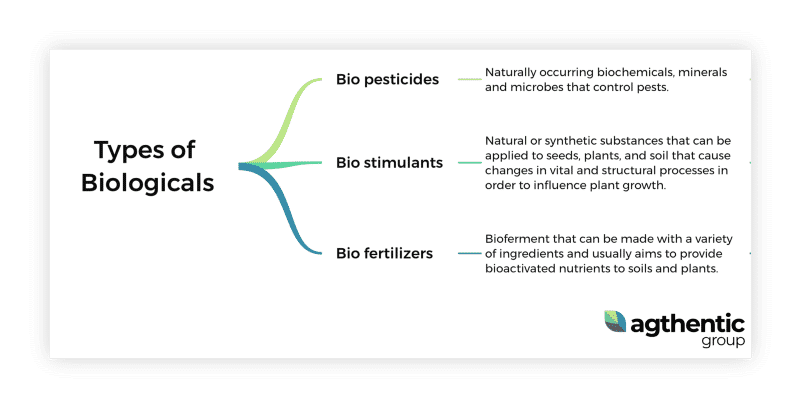 Within each category of biologicals, there are several kinds of products with many different underlying compounds and active ingredients. For example, the image below shows several sources of substances commonly used in biostimulants.

Another key consideration for biologicals is the application method: how it’s actually applied to the crop or soil. Examples include in-furrow, on seed, foliar applications, and broadcast soil applications. Each application method has pros and cons, depending on the intended use of the product and how it fits into the farming system (more on this below).

Why do biologicals have a reputation for being “snake oil”?

“This is the key piece for credibility for this space. In the past, sometimes you would say, ‘I put on this biological and I increased yield’. But that’s not the mechanism; that’s not the mode of action.” -Jarret Chambers

Like in any industry, the biologicals space has experienced ‘bad actors’ that truly are selling a snake oil product to gain a profit in the near term. The ‘snake oil’ reputation for biologicals also stems from instances where claims are being made about observed outcomes rather than measured (or more importantly understood!) performance.

For example, claiming that a product will result in a better yield is very different from demonstrating that RNA sequencing confirms how a certain gene expression explains why a better yield was achieved, and under what conditions.

As the underlying science and tools improve (such as RNA and DNA sequencing), our ability to measure and explain performance is increasing. We are now better able than ever to explain why certain outcomes are achieved, which is key to building confidence for growers, agronomists, and investors.

As Shane explains, “the synthetic life science companies and crop input manufacturers put in the time to understand the science in the lab and the fields [to understand] where [a product is] going to work, why it works, the percentage of control, etc. That’s where we need to get to in the biological space to really see the confidence increased so that farmers can feel better about utilizing them.”

“First of all, you have to fit in. I talk to many biologicals companies that … want to change the way a producer grows their crop. And I’m usually fairly blunt with them and say, ‘well, you’re not going to be successful. This has got nothing to do with your technology…logistics trumps technology.’” -Jarret Chambers

Despite the growth in the space in terms of science, interest, and investment, mainstream adoption of biologicals still remains low. Barriers vary depending on the perspective. For example, two key considerations for farmers are: (1) how do I know it’s working; (2) does it fit into my system?

The first challenge- knowing the product is working- is especially challenging with biologicals. With traditional herbicides, weed destruction is obvious; likewise, with traditional insecticides, the dead insects are clear proof of efficacy. However, with biologicals, the change can often be subtle or even invisible, making it hard to gain confidence that the product is working.

In terms of fitting into the system, there are several considerations, such as the equipment required to apply the product, any necessary practice changes, compatibility with other products, the product’s form and storage requirements, etc. For example, while it may seem trivial to ask a grower to change from a granular to a liquid fertilizer so that a liquid biostimulant product can be added, the reality is that they may not have the equipment to make the switch. And further, even if they do have the equipment, the timing of application for the biological has to be compatible with the herbicide they’re using, so it can be sprayed at the same time.

The challenge of “fitting in with the system” is, in some ways, only getting harder as farms consolidate and operations get more efficient. If a farmer is planting 7–10% of their operation in one day, there’s no room for trial and error.

Retailers have slightly different challenges and incentives that are also important to consider when solving for adoption. For example, retailers want to ensure they remain valuable and relevant to their customers throughout the year. This means having different insights and products at different times in the season, to be able to maximize the value delivered with each interaction. A biologicals company with just a single product is therefore not a strong value proposition- retailers need a portfolio of products that can help them differentiate themselves to their customers.

“The biggest opportunity is not to just cold turkey cut them out and use biopesticides; it’s to strategically integrate the bio-based products where it makes sense to make sure that they are augmenting that synthetic product.” — Shane Thomas

There are several opportunities to overcome these perception and adoption challenges, most of which center on innovations in the business models bringing these products to market, and many of which we’re already seeing with agtech startups in the market today. Examples include:

Over the last two decades, the ag biologicals space has made rapid advancements driven both by changing market pressures and technological advancements. However, there’s still a long way to go to move beyond the perception that biologicals are “magical plant whispering juices” and realize widespread adoption and returns for growers and investors. While understanding the underlying technology is key, the two unlock codes that we’ll need to see more of are deep market understanding and business model innovation.

For more insights from Shane and Jarrett, listen to this episode on our website, iTunes, Spotify, or wherever you get your podcasts. And for more podcasts & insights on the ‘so what?’ of agtech, subscribe to our newsletter.