The Opportunities and Challenges of Insect Farming for Feed 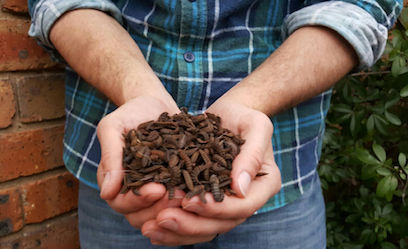 There are several macro trends driving innovation in the food system right now, and both “sustainability’ and “increasing demand for protein” are at the top of the list. These trends put the livestock industry, with its high feed-to-protein ratios and poor environmental credentials, at risk of disruption. They also put bugs- specifically black soldier flies (“BSFs” as they’re called by insiders, or maggots if you want to scare people away) firmly on the agritech scene.

Insect-for-feed (IFF) startups have emerged around the world to capitalize on this opportunity, particularly for aquaculture, including:

There are several opportunities and challenges for these startups and the IFF industry in general. Here’s a look at some of them.

Sustainability benefits. The Food and Agriculture Organization of the UN (FAO) endorsed insects for their sustainability benefits, saying, “insects have a high food conversion rate, e.g. crickets need six times less feed than cattle, four times less than sheep, and twice less than pigs and broiler chickens to produce the same amount of protein.” Further, insects require very little land or energy to produce, and they can be produced quickly and all year round, unlike other feedstock such as soybeans. And finally, insects can serve as a protein-rich substitute for the wild-caught fish that are often used as aquaculture inputs, rendering aquaculture a sustainable solution to overfishing.

Demand for Protein. FAO estimates that commercial feed production will need to increase by 70% by 2050 to meet the growing demand for protein. BSFs are high in protein, making them highly attractive for various livestock production systems, and a possible alternative to the meat, fish, and soybean meal that currently comprise 60–70% of production costs. Developing sustainable aquaculture systems, in particular, is becoming increasingly critical as we look for healthy and affordable sources of protein: the World Bank estimates that by 2030 nearly two-thirds of seafood will be farm-raised. This is a huge opportunity for the IFF industry and makes aquaculture a target market for many IFF startups.

Beyond aquaculture. Though aquaculture is a promising beachhead market, research (and logic) suggests that other omnivores, such as chicken, cattle, and various household pets, could benefit from insect-derived feed. For example, research studies have shown insects have higher palatability with relative conversion/production rates and less consumption in chickens; and other studies indicate larvae enzymes may help improve feed conversion ratios in cattle. More broadly, other uses of insect-derived products are being explored, such as fertilizer and biofuels.

A profitable solution to food waste. 40% of food is wasted in the US, and globally food waste is a huge issue that’s increasingly attracting cross-sector attention, yet few economically viable solutions have emerged. Flies thrive on food waste, meaning the waste stream can become a low cost or even revenue-generating input to the feed industry. A promising example of the circular economy at work!

Robotics and automation. These technologies are rapidly penetrating the agriculture industry more broadly, and they’re no less applicable here. Ynsect, for example, is using robotics to help ensure consistency in their processes.

Regulatory issues. Most countries lack a regulatory framework equipped to handle the potential risks (e.g., concerns over mad cow disease in Australia), while still allowing for innovations to enter the market. China is a clear exception, as they have an established regulatory framework, which is why companies like Protix have gone there to scale up production and establish traction. Further, regulations for this industry vary by country, making it hard for startups to expand globally. For example, in Australia, there are significant challenges to importing any kind of live insect, and companies must get approval to bring in insect-derived feed products. This may be a challenge for startups like AgriProtein as they look to enter the Aussie market with their branded MagMeal™ product. Across geographies, studies are underway to address concerns about feeding insects to other livestock (e.g., cows and chickens), such as chemical accumulations, allergic reactions, and infectious diseases. As more data are collected, regulatory frameworks will need to be updated, but this, of course, will take time.

Scaling production. To benefit from economies of scale, maximize returns, and compete with other sources of livestock feed inputs, startups must find reliable, consistent ways to scale production. Currently, the scale of the existing feedstock industry dwarfs the production capacity of insect-for-feed startups. One ton of even really high-quality insect meal will not move the needle for a feedstock manufacturer that regularly processes millions of tons in highly industrialized processes. Specific challenges include securing sufficient breeding stock, raising capital to support infrastructure investments, and managing risk in an industry without a spot market or secondary procurement source.

Managing Inputs. Like with many processes, the quality of the output depends upon the quality of the inputs. Imagine if every box of Cheerios was subject to the same variation as you might find across the marbling in porterhouse steaks. To get exactly the same product each time, producers must input the same type of feed for the insects, which in many cases is food waste. But few food waste streams are homogenous, so this requirement can limit the potential waste reduction benefits, as well as increase the complexity and cost of securing inputs. If input sources are restricted, questions about the sustainability of IFF arise: are insects actually a circular economy solution, or are they just a different, less input-intensive way to grow protein? And as many of the existing, clean organic food waste streams are consumed by other solutions (e.g., the ugly produce movement), will IFF remain viable?

Commodities or High-End Products. Many of the IFF startups mentioned above have adopted a product-centric strategy that includes IP around the production processes and a license to protect the output against the competition. But the feed market is highly commoditized: wheat, soy, and other commodities are sold in large quantities and priced based on protein content, not brand or provenance. Will the IFF industry similarly become commoditized, and if so, how will companies remain defensible?

A Viable Solution, or is it Just Buzz?

Though significant obstacles remain for this industry, the macro trends are pointing in the right direction; the livestock feed market is massive, and the pace of disruption is picking up quickly if 2016 funding is any indication.

But at the end of the day, we’re talking about farming animals. And like most types of farming, raising flies requires striking a complex balance between technology and nature. Successful players in this industry will have to find reliable ways to get adults to mate in captivity, build custom infrastructure, manage input costs and variable qualities, find customers willing to change the status quo, invest in technologies that maximize yield and improve quality, and more. Individual companies have emerged, but the industry, to the extent we can even call it an industry at this point, lacks established processes and best-practices and is shrouded in mystery as companies race to be first-to-market in an increasingly competitive market. The opportunity is indeed promising, but significant challenges remain if insects are to become a viable, sustainable source of high protein feed for livestock.

So while I don’t think 2017 will be the year “bug-fed, sustainably-farmed salmon” hits the plate, neither do I think it’s just buzz.